When the three women stood up and started dancing in their seats, veteran usher Jules Sesia knew she had to act. On stage was Angélique Kidjo, the Grammy-winning Beninese singer, songwriter, and activist famed for her powerhouse, rhythm-heavy shows — but the dancing women were blocking other concertgoers.

As Sesia approached, the women clearly expected to be told to sit down. Instead, she suggested they move to the side of the stage where they would have more room to dance. “They were thrilled,” says Sesia. “But the story got way better after that.”

The dancers rushed to the front, and moments later, Kidjo pulled them up on stage and got each one to perform a dance solo. At the end of the night, the friends were bursting with joy as they stepped into the lobby. “They were clapping their hands and laughing and giggling like kids. It was fantastic,” remembers Sesia. “And one of the women looked at me and said, ‘Did you see me on stage? That was for you.’”

Front-of-house staff at the Chan Centre get a unique perspective on everything that takes place here — not only on the concerts, theatre productions, talks, and graduations, but also on the lives of people who come to enjoy them.

Sesia has helped panic-stricken parents who lost tickets to their child’s grad ceremony, comforted a visitor in pain from a cancer treatment, and shared in the excitement and anticipation of music lovers who have come from far and wide to see their favourite artists.

“We hold programs and we open the door for people, but there’s a deeper level where we can actually show someone attention, kindness, compassion,” says Sesia, who has worked at the centre since the beginning. "I always tell new staff, ‘If we do our job well, we can turn an ordinary night into something wonderful.’ It’s a place where everyone can feel special.” 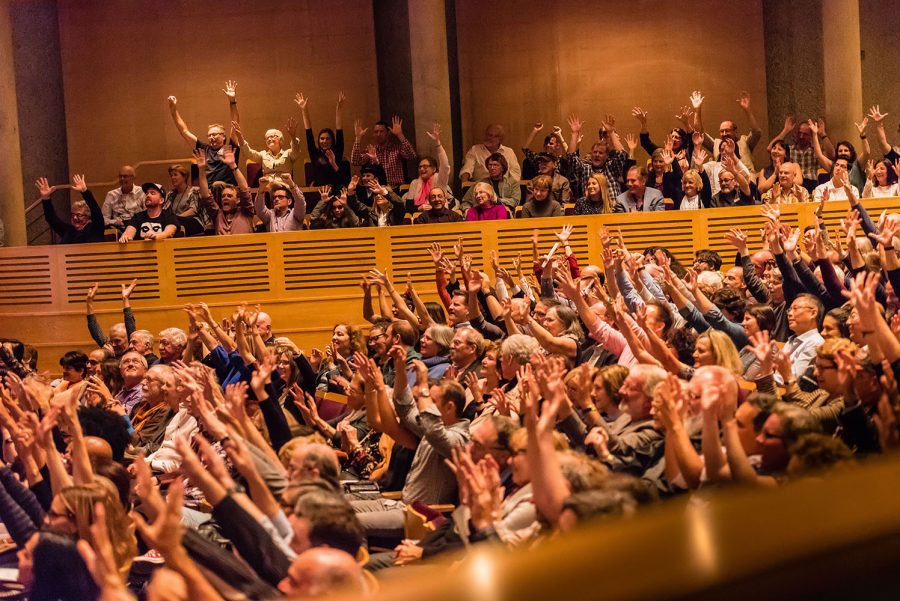 Sesia was fascinated as Nobel Peace Prize-winner Muhammad Yunus described his groundbreaking system of microfinance that would help loosen the grip of third-world poverty; she was moved to tears when Buddhists led a candlelit prayer; and she was captivated by sounds from big bands to Beethoven’s Ninth.

She watched author David Sedaris give a signed book to a young woman who didn’t have enough money to buy one herself, and saw singer Rita MacNeil invite a diehard fan to tea. She even found Atom Egoyan’s sunglasses, much to his appreciation. Along the way, she has welcomed countless new visitors, and gotten to know the regulars who return again and again, glowing as they go out.

“I say goodbye to everybody, and especially the ones who know me say, ‘That was awesome. Wasn’t that the best?’” says Sesia. “And I say, ‘You bet, that was absolutely the best.’”