Since the Kronos Quartet first formed in 1973, the group has been one of contemporary classical music’s most acclaimed ensembles. Along the way they have toured the globe and played hundreds of venues — and founding member and artistic director David Harrington says the Chan Centre is among the very best.

“It’s in the very top echelon of acoustic spaces. There’s not even a question about it in my mind,” says the renowned violinist. “And when I think about what it feels like on stage, a few of the spaces that come to mind are the Concertgebouw in Amsterdam, Carnegie Hall, and the Chan Centre.”

Harrington says that for artists, the centre is warmly inviting, from memorable pre-show dinners to post-performance receptions, and with its impeccable acoustics and intimate layout, the hall itself is extraordinary. The first time he performed here in 1998, he remembers thinking it was “one of the most amazingly beautiful acoustic concert halls Kronos has ever played.”

“It feels like it’s inviting the sound, pulling the sound from your instrument when you’re playing, and you feel supported and encouraged by what you’re hearing.” 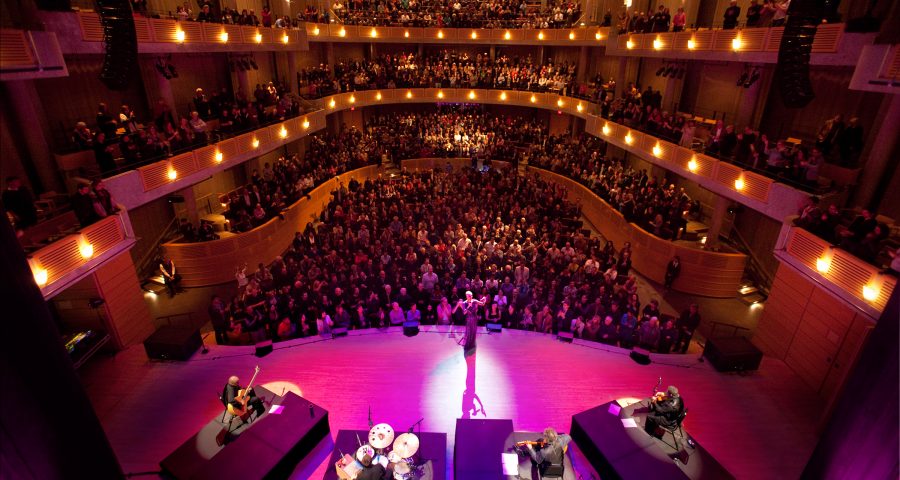 “It makes all the difference. It brings down your guard, and as a vocalist, you feel like you can really express all the dynamics of your instrument. You can use the softer side of your voice and the more intimate approach to the songs. And the audience is focused on the music,” says Downs. “The musicians really enjoy it because they can hear all the subtleties in their technique, and the emotion is quite different. There are very few halls that are perfect acoustically, but the Chan Centre is certainly one of them.”

Venues of the same calibre as the Chan Centre are rare, says Harrington, but he strongly believes they are essential.

“Honouring music is a good thing for human beings to do. It’s one of the most wonderful inventions that people have,” he says. “It certainly beats so many things that we see happening in the world — and it sets an example when people band together and make something great like the Chan Centre happen. It sets the bar higher.”