In a single week, the Chan Centre might play host to multiple graduation ceremonies, a talk between a celebrated anthropologist and a Buddhist leader, a TV shoot, a performance of First Nations spoken word, a film screening, and a high-profile concert.

But what visitors don’t see is just how much equipment, skill, and ingenuity it takes to turn those creative visions into realities — and behind the scenes there is a roster of technicians making it all happen.

There are walls to move, cables to run, microphones to test, visuals to display, webcasts to host, speakers to suspend, spotlights to operate, and innumerable production-specific problems to solve. There are 2,500 square yards’ worth of acoustic curtains to adjust, and a 25-ton acoustic canopy to raise and lower, from as low as 9 feet 4 inches up to 59 feet. The concert hall boasts 1,314 light bulbs, 514 of them in the canopy alone, so changes are a given.

Not only does the staff have to master those tasks; they must also keep up with the times and address concerns that couldn’t have even been imagined when the Chan Centre was first designed.

“With all of the technology now, a concert isn’t just microphones and instruments,” says Assistant Technical Director and Head Lighting Technician Andrew Riter, who has worked at the centre for 16 years. “It’s three computers, a laptop, a video projector, a YouTube feed and a live Facebook feed, and most of that is going through the audio department.” 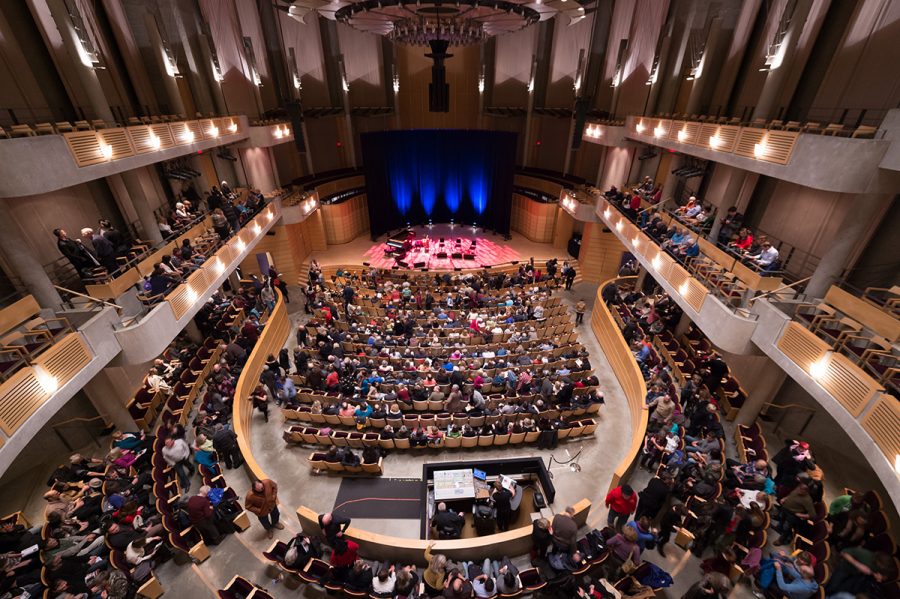 Riter remembers only a couple of mishaps. One came during a talk by the Dalai Lama when a stagehand accidentally knocked over a music stand and found himself instantly surrounded by security guards. The other involved two crew members who were moving a harpsichord across the stage mid-show — only to discover they only had the top half of the instrument in hand.

“They stopped, looked at each other, went back to where they started, put the harpsicord box back on the base, then picked the whole thing up by the base and carried it where it had to be,” remembers Riter with a chuckle. “Once the audience clicked into what was happening, they had a good laugh.”

In addition to overseeing the centre’s technical department, Co-Managing Director Cameron McGill is responsible for box-office staff, ushers, bartenders, the maintenance crew, and other operational staff.

He judiciously manages the maintenance of the building, and arranges for repairs and upgrades as necessary, whether it’s updating lighting and audio consoles, freshening the paint, or replacing hundreds of metres of carpeting that has served the centre since the start. (“Any carpet that had a pile 20 years ago and gets thousands of people going over it on a daily basis,” he says, “won’t have a pile anymore.”)

McGill, who graduated from UBC, as did his father and mother, also takes great pride in protecting the building’s original architecture. “The Chan Centre is a beautiful building, and all of us — the university, the province, the city, the students, the faculty, our clients, the arts community — we’re all so lucky to have it here because it’s such a fabulous resource,” he says. “And we want to protect that resource.”