Q & A with Marina Thibeault

Named Radio-Canada‘s Classical Revelation for 2016-2017, and one of CBC’s 30 Hot Classical Musicians Under 30, sought-after violist and UBC School of Music assistant professor Marina Thibeault is featured in a stunning new solo viola concert as part of the 2021 Chan Centre Dot Com Series.

In this Q&A, Marina talks about how her yoga training and nine-month stint in an ashram informs her teaching and performing, how trying a viola for the first time was like test driving a Ferrari, and her relationships to the pieces and composers in her upcoming digital performance premiering April 9, 2021. 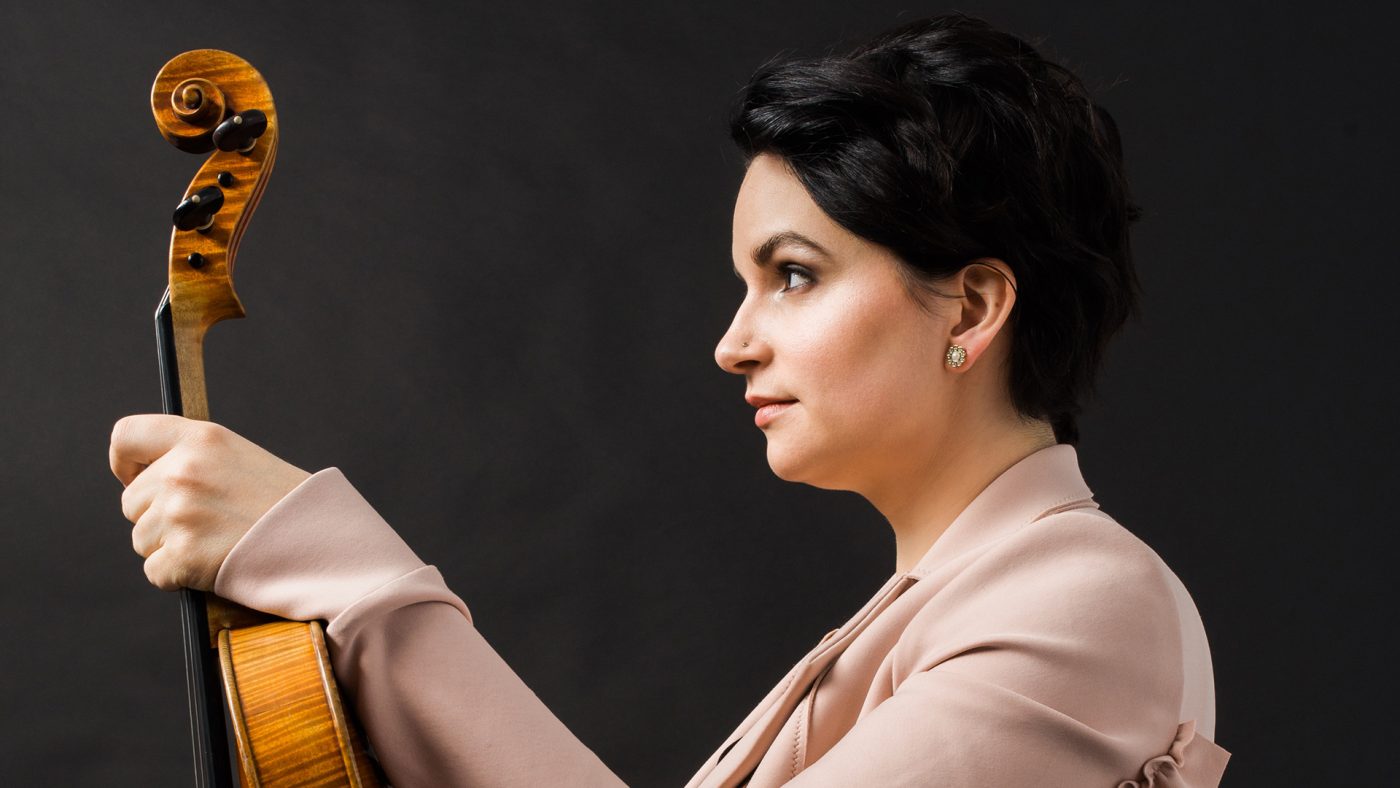 Chan Centre: Hi Marina!  Tell us a little bit about your early musical studies. We know that at just nine years old, you were the youngest violin student to enter the Conservatoire de Musique de Québec. What was that like?

Marina Thibeault: When I told my parents that I wanted to become more serious about my musical studies and enter the Conservatoire, my mother handed me the application form and suggested I try to fill it out myself. I was intimidated by the process of applying and auditioning, but also, it was a true test to whether or not I was ready for the experience. I have always loved being around more experienced musicians! I remember one funny anecdote from ear training class. Because I had perfect pitch, musical dictations were not a problem for me. A percussionist who was in the same class as me, but in his twenties, warned me I had better write my name on exams in ink so other students didn’t erase my name and write in theirs! That felt very cool. In high school, I went to a sports and arts school which allowed us to spend all afternoon practicing our discipline. The Conservatoire quickly became as comfortable as my house. I had my own practice room, would walk around in my socks all the time in the hallways. On weekends, holidays and even snow days, I would ask my parents to drive me there first thing. My goal was always to be the fist one to sign in and the last one to sign out of the registry. It was almost an obsession. The earlier I got there, the more time I could spend in the library, discovering vinyls and reading dusty vintage books that were falling apart. It was a similar experience as living the life of Hermione Granger in Harry Potter I suppose!

CC: At what point in your musical studies did you switch to playing the viola?

MT: At the age of 15, I heard Bruno Giuranna play both Brahms sonatas at the Domaine Forget International Festival in Quebec. In that moment, it became quite obvious that this was the instrument for me, and I went to see him after the concert. He let me try his instrument—it was like trying a Ferrari! When I played the lower strings, I felt like I had found my voice. I had always been a violist. I later studied with him for one year in Lugano, Switzerland, and that was when I knew I wanted to develop my profile as a pedagogue.

CC: You moved to Vancouver and started your role as Assistant Professor of Viola and Chamber Music here at UBC during the 2019-20 academic year – one of the most unusual on record with the COVID-19 pandemic forcing all sorts of adaptations for staff, faculty and students. What has it been like for you teaching and performing during this time?

MT: Because I mainly teach private lessons, I was able to resume in-person instruction in September, thankfully! There is a very vigorous safety protocol we all must follow, which has been working quite smoothly. We have to accommodate an air gap, which means that my lesson needs to stop when my timer rings to allow time for me to move to an alternate studio for the next lesson. The last few minutes of a lesson is usually when both the teacher and the student are in a flow, in symbiosis. In pre-covid times, lessons would tend to spill over, and often I would invite the next student into the room as peer review or support. This isn’t something we can accommodate now. That said, we hold our studio class in the concert hall, and the larger space means more than one student can attend in-person and watch their colleagues play, which is so important.

CC: In addition to your passion for music, you are also an advocate for personal wellness and mindfulness both in your own practice and your teaching. Can you tell us more about this?

MT: In 2013, I moved to an ashram for nine months and completed a Sivananda Hatha Yoga teacher training. In addition to learning the yoga postures, I studied the Bhagavad Gita, the Sanskrit language, Vedic philosophies, and much more. Right when I was becoming more involved in the organization—I started to teach, was assigned my mantra and spiritual name (Maitreyi), became responsible for more important service duties—the Swami Acharya heard me play viola and told me that my karma was not to be in the ashram, but to go into the world to play music. Those nine months were a crash course for me on how to take care of myself, so I could serve others. Becoming a mother and a teacher is fueled by all of the rich experiences that I lived during that time.

Merging my research interests from that experience with academia, I published a study in the Canadian Viola Society Journal on the benefits of mindfulness for musicians (The Zen Art of Playing Music), and this month, my article was published in the American Viola Society Journal on the topic of sports psychology applied to elite performance (Athletes in the Practice Room), a topic I am currently studying as part of my doctoral comprehensive exams.

"When I played the lower strings, I felt like I had found my voice. I had always been a violist." 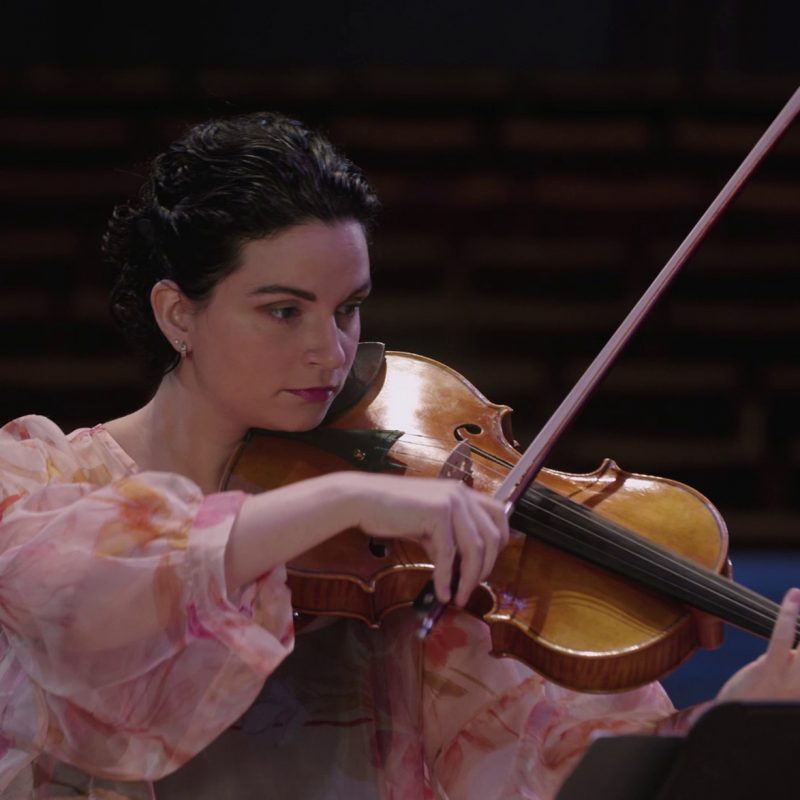 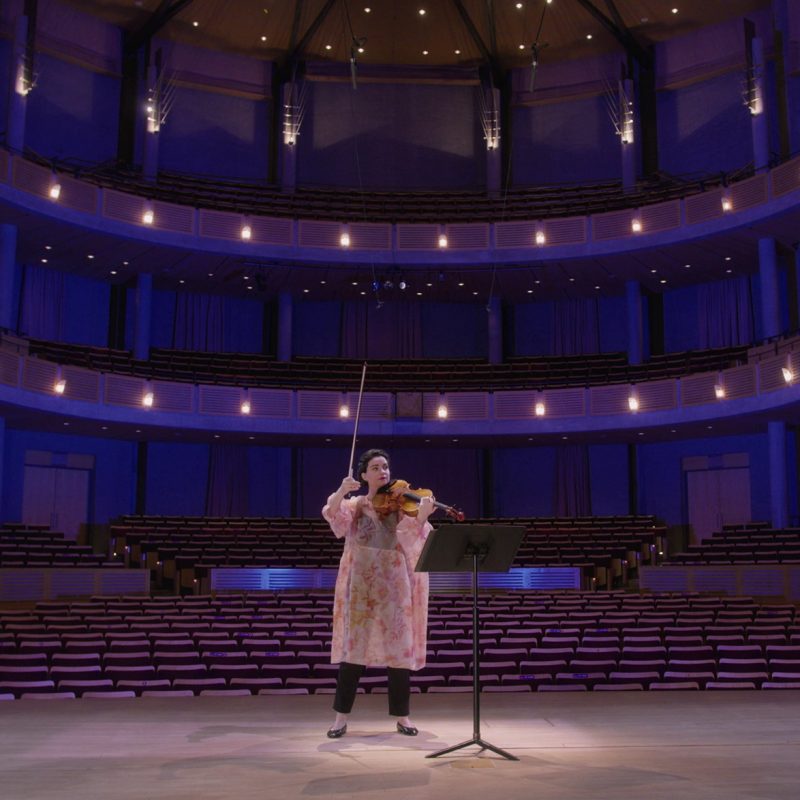 CC: The program you chose for your concert in our Dot Com Series focuses on women and non-binary composers. What drew you to these composers, and these specific pieces?

MT: Ana Sokolović and I have been working together since 2016. Her music has become such a strong part of my identity as an artist, and has contributed to my vision of where I would like the viola repertoire to evolve. The viola transcription of Cinque Danze is a project that has been in the works since 2016, and it took a pandemic for me to stand still and dive into all of the strategies needed to bring it to life, and to give it the necessary improvised feel while actually being completely organized on my end. This has been a process that I’ve found extremely rewarding.

As part of my doctoral research I looked into many women composers, performers, and pedagogues working with the viola. I always include a Canadian work when I get the opportunity to play on the international scene, and I had previously chosen Dorothy Chang’s Streams for my Ohio debut in March of 2019. This is now my second time performing it, thanks to the Dot Com Series!

I first heard about Melody McKiver’s work when CBC did a profile on them titled “Meet Melody McKiver, the Anishinaabe musician changing the way we think about the viola”. I was immediately compelled by their album Reckoning, which combined viola with electronics, and was eager to find a way to play their music in an acoustic way. I feel grateful to have received Melody’s permission to adapt the pieces for solo viola, and they are now very portable for me to play in various settings both inside and outside of the concert hall.

CC: In addition to taking your music into prestigious concert halls around the world, you have also made a point to reach out to at-risk communities through concerts at locations such as homeless shelters—can you talk about why this is important to you?

MT: During my undergraduate studies at the Curtis Institute of Music, I had the chance to gain experience with various outreach activities. I was part of an ensemble that would play in schools, children’s hospitals, homeless shelters, and more. One of the most powerful experiences and connection I had with an audience was at the WinterShelter, a homeless shelter managed by the Community OutReach Partnership in Philadelphia.

CC: The relationship between a performer and their instrument is of huge importance. We understand that you’ve just acquired a new viola, and that you’ve given it a name after one of your favourite actors?

MT: In 2016, I fell utterly in love with a modern viola from J & A Beare. This magnificent instrument, made by Gordon Kerr, finally arrived here in Vancouver this past January. His frames are the most comfortable and efficient that I have ever tried, and the sound is a powerhouse. Perhaps most importantly, his instruments act as teachers in the ways in which playing them guides performers to seek and draw out the many rich tone colours available.

I was pregnant with my first child when I first tried one of his instruments. My career was just taking off, and had no certainty I wasn’t just going to be the ‘flavour of the month,’ so I waited before purchasing it. And waited. Then I had another baby and couldn’t justify owning two violas, as I had since decided I didn’t want to give up my first instrument (my beautiful Max Millant, the viola that I have been playing since 2014) with the hopes that I will someday play together with one of my children—our 98th percentile toddler Lucien, or my daughter Tabea, named after the queen of the viola, Tabea Zimmerman.

I am a big fan of Schitt’s Creek and I have named my new viola “David”, after the character played by Dan Levy.

CC: We know you’re very active as a performer, what recent or upcoming projects are you excited about?

MT: The world is opening up again, and I will soon be traveling to Kamloops to play the viola concerto by Pēteris Vasks with the Kamloops Symphony and music director Dina Gilbert. This is one of the most recent viola and chamber orchestra concertante works, and it’s absolutely brilliant. The writing is luscious, earthy, melancholic, and full of Latvian dances that are very catchy and a blast to play! (That concert will be available April 23 to May 22, details here).

This summer, upcoming plans include a recording in Toronto with the flute/harp ensemble Duo Kalysta, as well as teaching at Domaine Forget in Charlevoix, QC. I also have a performance in front of a live audience planned on October 2nd at the Chamber Music Kelowna series with pianist Corey Hamm. 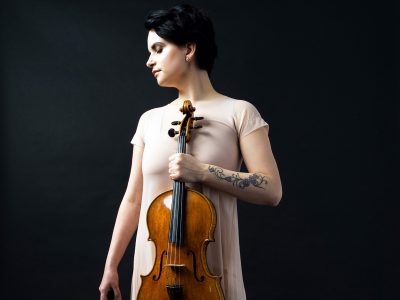 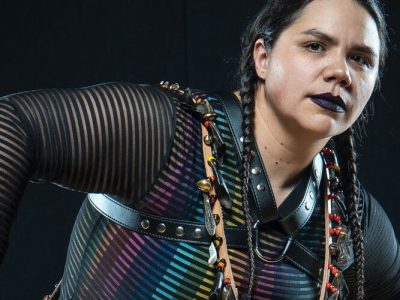