Roots and Shoots: A Growing Experience

Before this year, Laura Secord Elementary Vice Principal Ashwin Prasad had never heard of the Chan Centre’s Roots and Shoots World Music Education Program—but when the program coordinator invited his entire school to a performance by an internationally renowned artist, he leapt at the chance.

First launched in 2006, Roots and Shoots is an outreach program for under-resourced Vancouver-area elementary schools that offers world music concerts in the Chan Shun Concert Hall. The program comes at no cost to students or the school, as all expenses are covered through the support of individual donors as well as the Chan Endowment Fund.

The Laura Secord students ranged in age from 5 to 13, and for many of them, the show by Galician bagpiper Cristina Pato marked their very first time seeing a concert in a professional venue. During the show the kids clapped and danced, and learned about the various instruments; the bass player also explained how he first fell in love with the upright bass at a school show.

“All of the kids seemed very engaged and really enjoyed it. When we came back many, many of the students told me how much they really, really liked it. There was definitely a buzz around the school before and after,” says Prasad. “And the parents were very appreciative that we were able to set it up. They thought it was a wonderful experience.”

Of course, getting nearly 700 students to a theatre is no small feat, and Prasad was highly impressed by the Chan Centre staff’s level of organization and attention to detail—and when he realized the night before the show that he would need additional buses, they made it happen. (“I’m getting a lot of credit for this,” he jokes, “but they did it all.”) 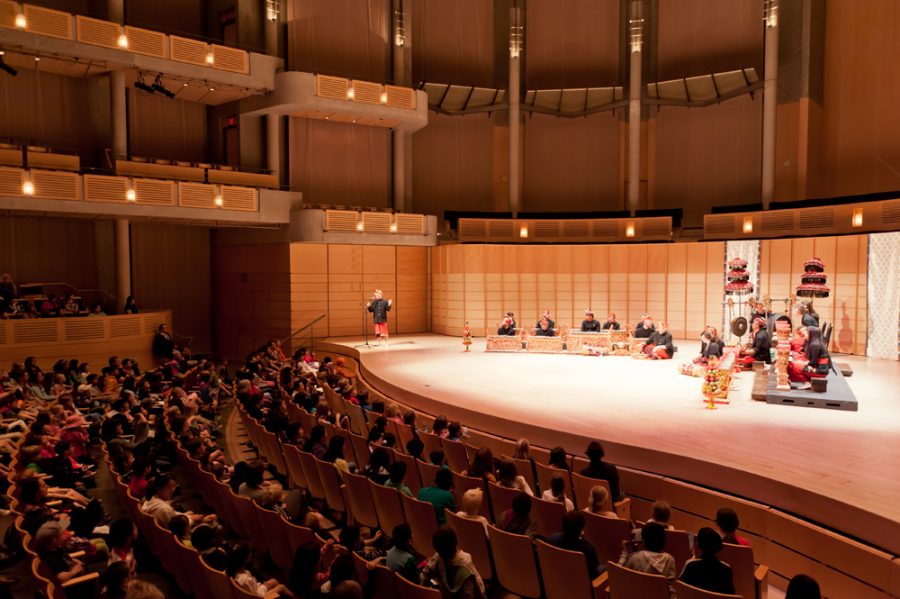 "Anytime we can expose our students to a variety of music genres it’s always beneficial."
Ashwin Prasad

But more than anything, says Prasad, Roots and Shoots gave the students a musical experience they won’t soon forget, and likely inspired some to take up music themselves.

“Anytime we can expose our students to a variety of music genres it’s always beneficial,” he says. “We have performers who come to our school and the kids gather in the gym, which is great. But having the opportunity to actually leave the school and visit a wonderful facility like the Chan Centre—a theatre environment that most of these kids probably haven’t or may never have experienced—is a real treat.”

Judging by the letters and drawings Prasad received from students after the show, he’s absolutely right. “I thought the show was AMAZING,” wrote one student alongside a drawing of the instruments the band played. “All the students had fun while they were dancing and singing. I wish I could go back again. I wanna thank the Vice Principal for bringing us there!”