Most concert halls are designed around audiences — but one of architect Bing Thom’s primary aims was to create the best possible experience for artists.

Thom’s affinity with musicians was deep and enduring. At the age of 10 he immigrated from Hong Kong to Vancouver, where he played in the Kitsilano Boys’ Band and bandleader Arthur Delamont became like a father to him. Although Thom didn’t choose music as a career, he continued to play clarinet and found great joy in live music.

“He knew that when the artist walks out on the stage, you have to be inspired to play your best work,” says Bing Thom Architects Principal Michael Heeney, who was instrumental in the Chan Centre’s development. “So that impact was very, very big in how he conceived and developed the building.”

Music echoes through what Thom called “the visual acoustics” of the building. The Chan Shun Concert Hall itself is shaped like the inside of a cello, and the wood seats and accents add to the room’s warmth and exceptional sound. Radiating stainless-steel cables resemble the strings and frets of an instrument, providing another subtle musical reference.

For a venue of its size, the hall is also remarkably intimate. Because the balconies are stacked rather than reaching backward, the room can hold nearly 1,400 people—and yet the artist is never more than 100 feet from any audience member.

“Beauty and functionality are never in conflict. What works and what is beautiful are one and the same thing,” said Thom in a 2002 interview. “Beauty is not something to be applied to something else. Beauty evolves from a deep understanding of need.” 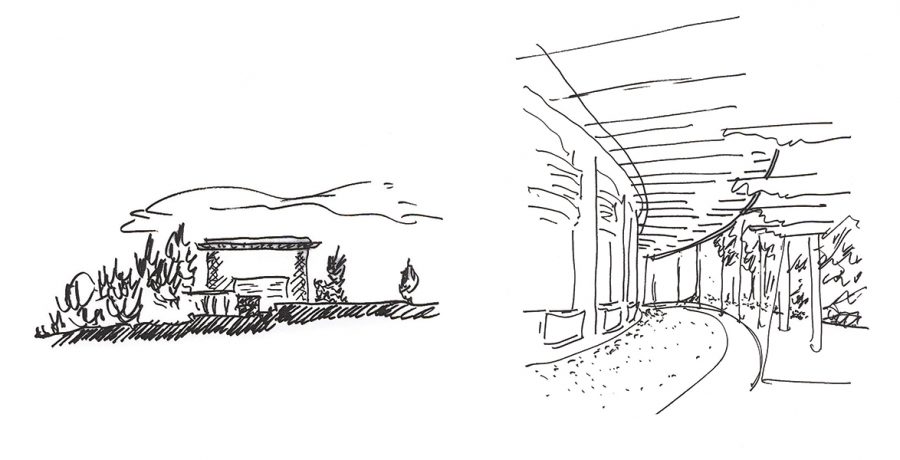 The Chan Shun Concert Hall is one of three venues at the Chan Centre. Modelled after the famed Globe Theatre in London, the experimental “black box” Telus Studio Theatre was designed to maximize creative options. Twelve three-tier seating towers can be moved to create any number of configurations, while a complex catwalk system provides a wide range of rigging possibilities. Down the hall, the Royal Bank Cinema is a comfortable 160-seat cinema primarily used for academic lectures and film screenings.

From the exterior, the building exudes graceful, timeless style. Because of its size — 76,000 square feet over eight storeys — Thom was concerned that it could seem imposing and out of step with adjacent structures, many of which were half the height, so he made several key design decisions.

Rather than clearing the site and opening views to Howe Sound, Thom preserved the soaring trees, which made the building seem smaller in scale. Without defined edges, its oval shape makes its size less apparent, too, while the exterior’s diamond-shaped zinc cladding, which changes appearance with the weather, gives the visual sense that the building is receding toward the top.

The design also reflects the architect’s deeply rooted reverence for nature, and the interplay between the building and the natural world is a recurring theme. The lighting in the rotunda ceiling is meant to emulate stars in the night sky, while the leafy pattern on the carpet — designed by Thom’s wife Bonnie — echoes the forest floor.

But by far the most striking link to the natural world is the floor-to-ceiling glass wall of the lobby. The glass is tilted at a 10-degree angle so that instead of seeing their own reflections, concertgoers look out to the Dorothy Somerset Grove — a grouping of firs and cedars, many over 100 years old.

Thom worked with Boston lighting designer Bill Lam to strike the perfect balance of indoor and outdoor lighting so the trees would be clearly visible at night. “I remember seeing these two guys sitting in a room with the lights off,” remembers Heeney with a laugh. “They had this model of the glass, and they were playing around with flashlights, trying to figure out what angle the glass could be to minimize the reflections. It was quite fun.”

In addition to its bold architectural features, the building boasts myriad smaller but equally thoughtful touches, including the exquisite painting Silent Woods, which Thom commissioned from acclaimed B.C. artist Gordon Smith, that hangs near the entrance. (It’s actually made up of several smaller paintings, allowing it to follow the curve of the wall.) Centred around a futuristic-looking circular steel and glass sink pedestal, the ultra-modern women’s washroom is so striking that when the Chan Centre first opened, women were bringing their boyfriends and husbands in for a quick look.

In the end, the building needed to satisfy a remarkable range of needs, and to act seamlessly as a concert hall, a ceremonial space, a rental facility, a rehearsal hall, and more. Twenty years later, Thom’s graceful design is regarded as a triumph.

“The design of a performing arts centre encapsulates everything I love and believe about architecture,” said Thom, whose passion was creating people-focused designs that elevated entire communities. “Like music, a building must always respond to human emotional needs, especially our yearning for the next surprise or the next delight.”

Bing Thom died in Hong Kong on October 4, 2016 at the age of 75. The sad news triggered an outpouring of heartfelt tributes from the architecture community, as well as those who had been touched by the convivial architect and his outstanding work.

“He inspired other architects to realize that you are doing more than just putting together bricks and mortar,” says Heeney. “You have the ability to change society — and in fact, you have a duty to do that.”