Jake Shimabukuro is one of the most exceptional and innovative ukulele players in the history of the instrument—an artist who has drawn comparisons to musical titans such as Jimi Hendrix and Miles Davis. He can still vividly remember the first time he held a ukulele, at age four: “I fell in love with the ukulele immediately. From that day on, you had to pry the instrument away from me in order to get me to do anything else.”

Starting his career in Hawai’i, he took his inspiration from some of the islands’ great uke players—Eddie Kamae, Ohta-San and Peter Moon. But he quickly expanded his scope from there, drawing influences from across the musical spectrum. As a member of the group Pure Heart, Shimabukuro became a local phenomenon. From Hawai’i, his fame next spread to Japan. He was signed to Epic Records (Sony/Japan) in 2001 as a solo artist. It was the start of what would become a deep catalog of solo albums, noted for their dazzling fretwork, ambitious repertoire and wistful melodicism. And in 2005, Shimabukuro became an international phenomenon when a video of him performing the George Harrison song “While My Guitar Gently Weeps” went viral on YouTube. 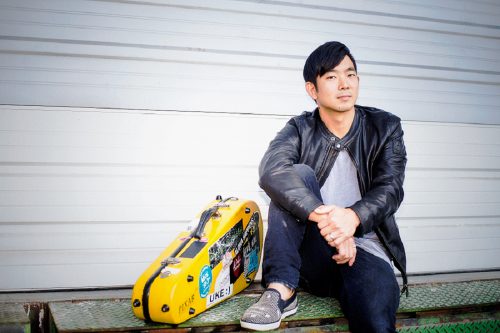 “Jake is taking the instrument to a place that I can't see anybody else catching up with.”