UBC Opera: Singer Behind the Song

with Simone Osborne and Gordon Bintner

In this intimate presentation you will get to know the artists and gain an insight into the life of an opera singer working in Germany through an interview with UBC Head of Voice and Opera Prof. Nancy Hermiston. Following the interview, you will hear Simone and Gordon perform opera favourites from Mozart’s The Magic Flute and The Marriage of Figaro, Gounod’s Roméo et Juliette, Wagner’s Tannhaüser, Dvorak’s Rusalka and many more! A masterclass featuring members of the UBC Opera ensemble will close the evening.

We hope you join us for this lovely evening of music and learning more about these singers on and off the stage! 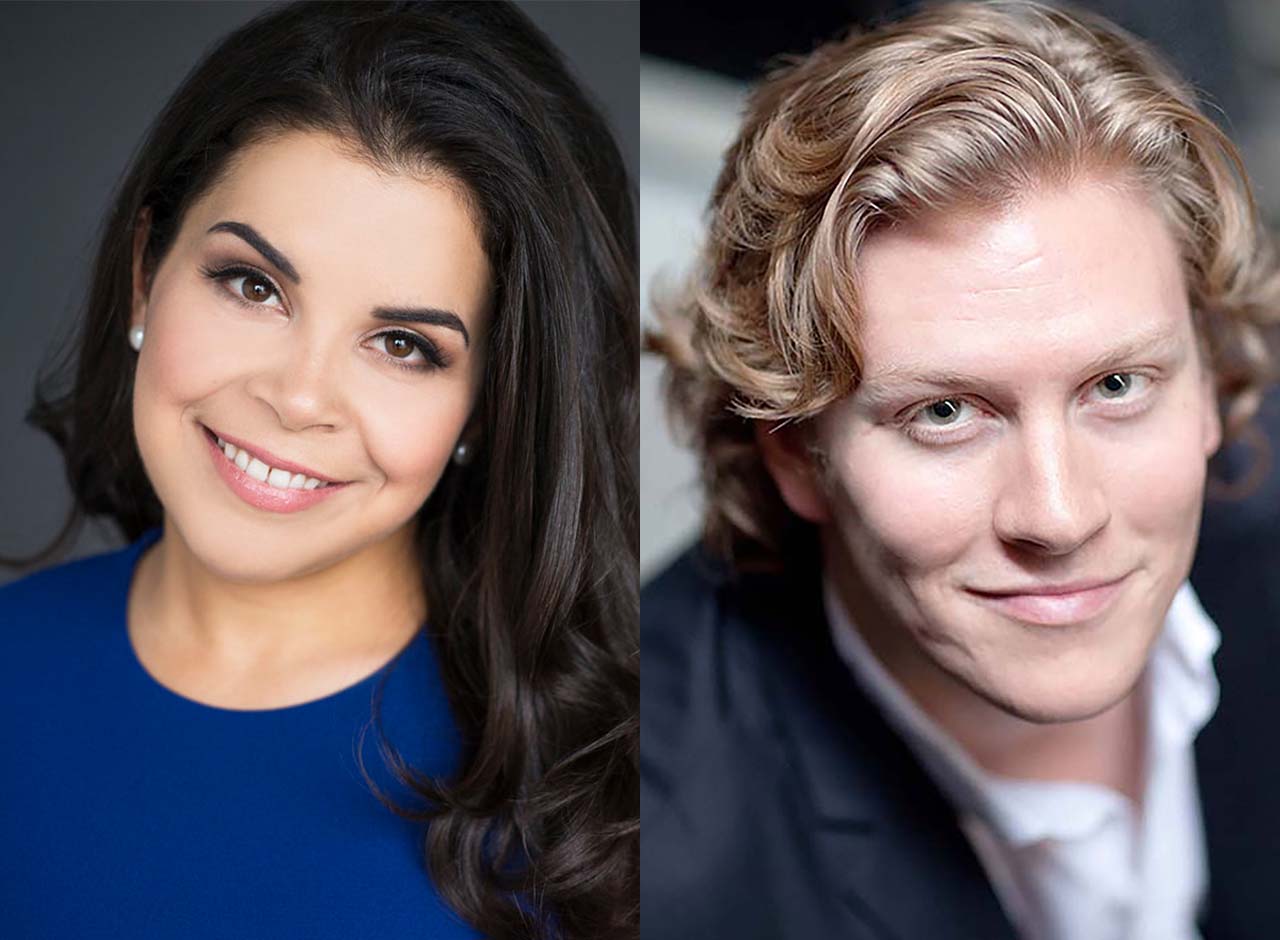 Canadian soprano Simone Osborne has been hailed as “a joy to hear” (Los Angeles Times) with “a sweet and clear sound, sensitive phrasing and gleaming sustained high notes” (New York Times). Ms. Osborne was one of the youngest winners of the Metropolitan Opera National Council Auditions.

Recent performances include a return to Oper Frankfurt in La serva padrona(Serpina), a return to the Canadian Opera Company for Hänsel und Gretel(Gretel) conducted by Johannes Debus followed by her role/house/country debut at Oper Frankfurt in the Delius A Village Romeo and Juliet(Juliet) conducted by Elias Grandy. Additional recent engagements include debuts with Festival d’opéra de Québec and Pacific Opera Victoria in the new Lepage production of Die Zauberflöte (Pamina) conducted by Thomas Rösner and a new production of Somers’ Louis Riel (Marguerite Riel) at the National Arts Centre in Ottawa and Opéra de Québec.

A graduate of the Canadian Opera Company’s Studio Ensemble program, Ms. Osborne has returned to the COC for L’elisir d’amore(Adina), Carmen(Micäela), in Carsen’s production of Falstaff(Nannetta), Un ballo in maschera(Oscar), La bohème(Musetta), Christopher Alden’s Rigoletto(Gilda), Gianni Schicchi (Lauretta) conducted by Sir Andrew Davis, and Die Zauberflöte (Pamina) conducted by Debus. While in the Ensemble, Ms. Osborne performed in Idomeneo (Ilia) under the baton of Harry Bicket. She was also seen in Carmen(Frasquita), Maria Stuarda(Anne Kennedy), and Il barbiere di Siviglia (Rosina) on tour, as well as a performance of the Pribaoutki songs in the premiere of Robert Lepage’s The Nightingale and Other Short Fables.

Simone was seen in her hometown of Vancouver in Rigoletto(Gilda), Roméo et Juliette(Juliette), and Die Zauberflöte (Pamina) with Vancouver Opera. She joined the Vancouver Symphony and Bach Choirs for Handel’s Messiah, and gave a recital for the Music in the Morning series. On the concert stage, Ms. Osborne crossed the United States in a 15-city tour with the Metropolitan Opera Rising Stars series. She returned to the Toronto Symphony Orchestra for performances of both Mahler’s Symphony No. 4 and a selection of soprano opera arias and debuted Berlioz’ Les nuits d’été with Berkeley Symphony.

Ms. Osborne made her role debut as the title role in Lucia di Lammermoor at Edmonton Opera. On the concert stage, she appeared in Honegger’s Jeanne d’Arc au bûcher(Marguerite) for her debuts with Orchestre Philharmonique de Monte-Carlo, Orchestre National du Capitole de Toulouse, and Orchestre de Paris, all under Kazuki Yamada. She also debuted with the New York Philharmonic in the same piece under Alan Gilbert.

Bass-baritone Gordon Bintner has been an ensemble member at Oper Frankfurt since the 2016/17 season where he has simultaneously honed his craft and built a broad and impressive operatic repertoire. On the Oper Frankfurt stage, Bintner has appeared as both Count Almaviva and Figaro (Le Nozze di Figaro), Papageno (Die Zauberflöte), Argante (Rinaldo), Gorjančikov (From the House of the Dead), Chorèbe (Les Troyens), Graf (Capriccio), Harlekin (Ariadne auf Naxos), Count (Schreker’s Der ferne Klang), Plumkett (Flotow’s Martha), Vladislav (Smetana’s Dalibor) and Escamillo (Carmen) among many others.

In the current season, Gordon Bintner performs as Don Polidoro in a new production of Cimarosa’s L’italiana in Londra at Oper Frankfurt, return to Canadian Opera Company as Papageno and makes house débuts at Opéra National de Paris as Junior in Bernstein’s A Quiet Place conducted by Kent Nagano, and at Royal Opera House Covent Garden as Guglielmo in Così fan tutte, conducted by Julia Jones.

As a former member of the Opera Studio of the Canadian Opera Company, Gordon Bintner has since regularly returned to its stage as a guest artist, recently making his role debuts there as both Eugene Onegin and Belcore in L’Elisir d’amore. As a graduate of its prestigious Young Singers Project, he has also performed at the Salzburg Festival as Astolfo in Donizetti’s Lucrezia Borgia, conducted by Marco Armiliato and as Phorbas in Achim Freyer’s new production of Oedipe under conductor Ingo Metzmacher and at the Salzburg Easter Festival, he has appeared under Christian Thielemann as the Herald in Verdi’s Otello.