Q & A with Aaron Gervais

Composer Aaron Gervais talks about his new piece Break Up Make Up which was commissioned by the Chan Centre for the Performing Arts and will be premiered in the Telus Studio Theatre April 29 + 30 as part of Superimposition. 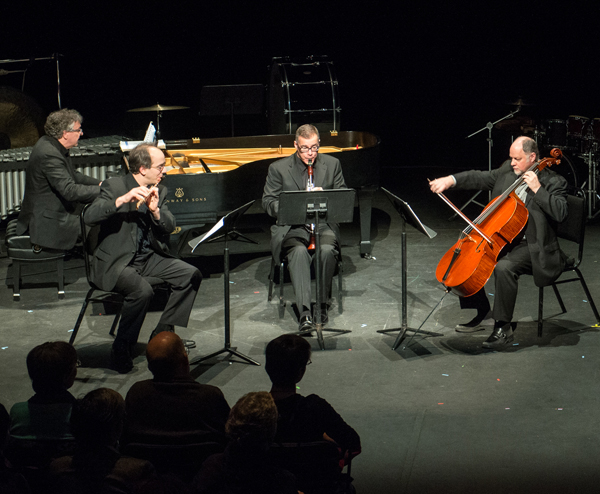 How did you get into writing music? Do you remember the first piece you ever composed?

In a sense I have always written music. Both my parents play music, and I started learning an instrument very young. I’ve always been a curious person by nature, so I wanted to know how the music worked… That led to composition, though I didn’t really think of myself as a composer until some point in university. I thought of myself as a percussionist who sometimes needed to write music because the music I wanted to play didn’t exist.

In terms of a first piece, the earliest thing I remember was a sort of theme-and-variation that I did on a video game theme that I liked. I was maybe in grade 6 or 7… my parents had bought a bunch of MIDI equipment, though I don’t remember why, they didn’t use it much. I played with it a lot and one day started putting together that video game theme.

The piece was commissioned for Nu:BC and Turning Point playing together, with Nu:BC as soloists in a concerto. I wanted to juxtapose the two ensembles, rather than just using Nu:BC as three soloists. So the setup resembles a relationship: two ensembles interacting, the same way two people do. The push and pull of their interactions reminded me of a romantic relationship, and I thought of the metaphor of the stormy on-again, off-again couple that always fights and breaks up and gets back together.

Once I decided on that theme, I realized I had to go all in: if it was sort of there but buried deep within the musical development, the idea would be lost. So I worked on musical ideas that very clearly show the two ensembles either working together, or fighting each other, back and forth like that.

Also, because the piece is about romance, I thought of the Romantic era composers… that’s probably my least favourite era of classical music history, and of them all, Liszt is the one that really annoys me the most. I’m a contrarian by nature, so I set myself a challenge of trying to channel something of Liszt’s spirit into this piece, but to do it in a way that is more me. It’s sort of making fun of Lisztian stereotypes, but you can also see it as a reconciliation perhaps.

In any case, all that makes for a bombastic, high-energy piece with lots of bright colours and silliness.

What is your compositional process like, and how did you go about writing this piece?

There are three parts to my process. The first is consultative: I discuss with the ensemble or commissioner, learning about their interests and finding common ground. That helps me narrow down the field of infinite possibilities and decide what to focus on.

The second part is brainstorming. I start with a concept or idea. It’s not usually a motif or musical sound, but sort of a feeling, how I want the music to affect me. Then I explore, find sounds or ideas that I like. But they’re not fully baked, they usually need to be refined and expanded.

That’s where the third part comes in, which I see sort of like sculpting. I chip away and polish until the gestures and phrases feel right.

In Break Up Make Up, the initial concept was that romantic relationship described above. That led me to certain kinds of musical development and the desire to use outsized, melodramatic musical gestures. And with this piece my sculpting process was really about making sure the gestures were extreme enough. I actually sent the score to my copyist and then a week later realized I had to amp it up even more, so I told him to stop.

Musical metaphors are like stage makeup: they’ve got to be oversized if you want them to come through. This is not a piece about delicate, nuanced development; it’s about in-your-face, impatient, melodramatic energy, and most of the compositional challenges were about getting to that really explosive place.

What inspires you to write music?

I have a strong desire to make things that are valuable and unique to others, which counterintuitively makes me focus on being as true to my musical interests as possible. You can never really know if anyone else will like your music, but you can know if you like it, so I do the best I can to write music that I really really love and is as perfect as I can make it. I’ve found that gives me the best odds of resonating with other people as well.

At the same time, composition is really a vocation for me. I get restless and depressed after a few weeks if I’m not writing music, so that forces me to keep doing it… less inspiration than compulsion.

Tell us about your best or most memorable live music experience

It’s always changing. I tend to live in the present and forget about past experiences, I’m not very nostalgic.

But that said, one thing that has always stuck with me was the feeling of having my music performed by an orchestra for the first time. I had written something for the University of Alberta string orchestra and here I was in the first rehearsal, with 60 or so string players surrounding me. The conductor Tanya Prochazka (who sadly passed away last year) lifted her baton and the players started playing and it was just this huge rush to be in the midst of all these musicians all working together to realize something that I had put on the page. 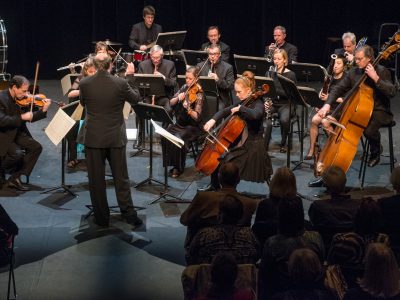