UBC School of Music: Rediscovering humanity and the power of a story 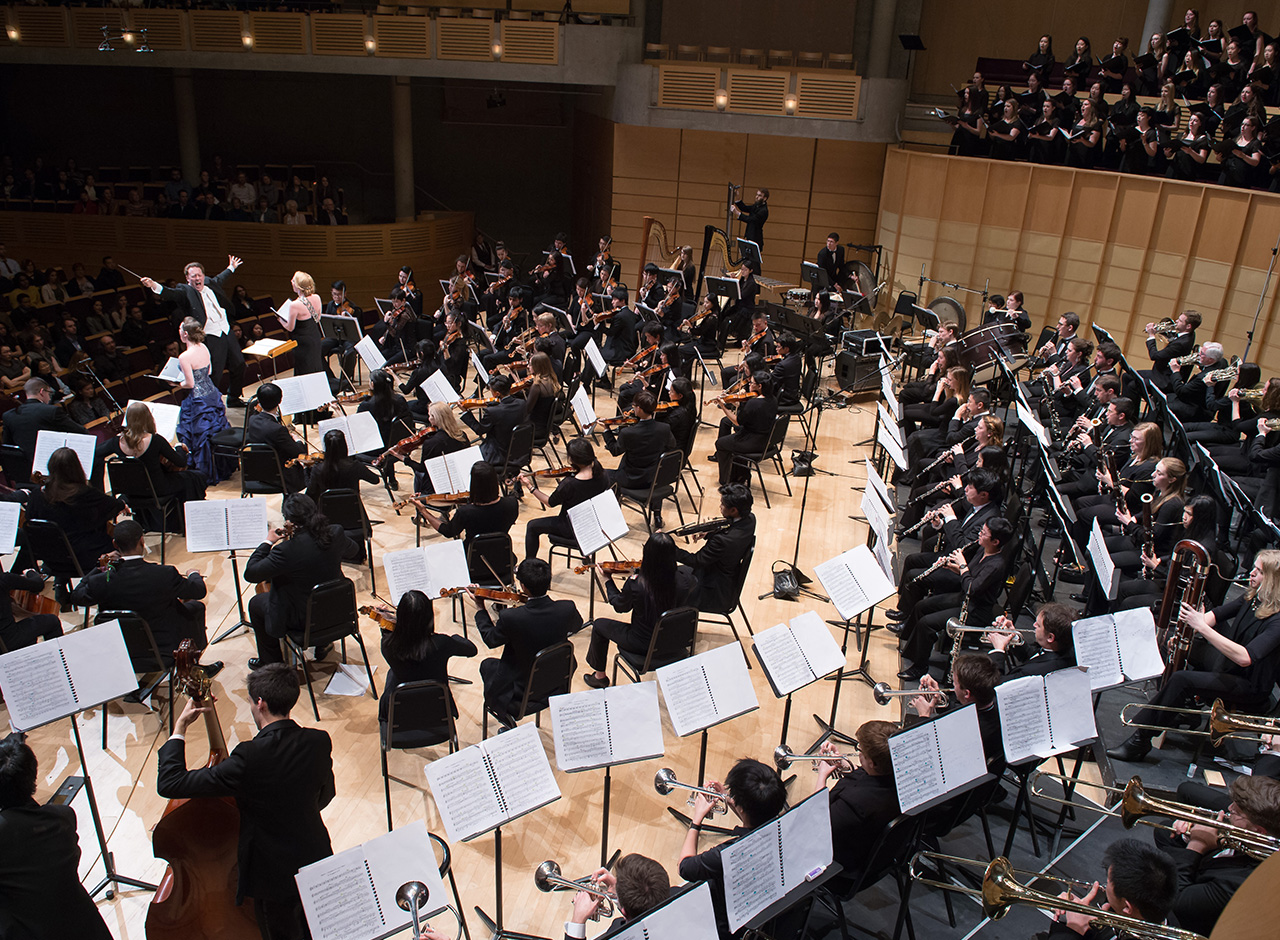 As the holiday season rounds the corner, the UBC Symphony Orchestra prepares for yet another exciting program to celebrate the winter festivities. On December 2nd, UBC School of Music Director of Orchestral Activities Jonathan Girard and the UBCSO will fill the Chan Centre with sounds from Satie, Poulenc, Stravinsky and Prokofiev. Along with the Canadian premiere of the suite from Poulenc’s ballet, Les Animaux Modèles, the UBCSO will also be playing Debussy’s orchestration of Satie’s Gymnopédies I & III, Stravinsky’s The Firebird Suite, and to round out the concert – the whimsical tale of Prokofiev’s Peter and the Wolf, narrated by UBC’s 15th President and Vice-Chancellor, Professor Santa J. Ono.

The holidays can often be a whirlwind of wrapping paper and ribbons; we get caught up with gifts and decorations to the point where we can lose track of what matters the most – people. When we look past the materialistic and commercial aspect of the holidays, we find that the season in its core is all about connecting with stories and valuing the time we spend with friends and family. As musicians, the humanity in our work can often get neglected as well. “No matter how much time we spend perfecting our technique, musicianship, and learning the notes, we have to maintain the humanity in our art,” says assistant conductor Jaelem Bhate. “Connecting through music is one of the most rewarding experiences, and working on a piece like Peter and the Wolf where we are able to act as both sound creator and story teller is a rare experience.”

Music has always had the power to connect audiences with engaging tales, all without uttering a single word; and like family, the orchestra is a storyteller of its own right. On December 2nd, it will be a night of sharing and bonding, as the orchestra will act as one cohesive storyteller to four beautiful tales that will bring the audience just a little bit closer to home.

Les Trois Gymnopédies are atmospheric piano pieces by Erik Satie. While the pieces themselves do not have a plot, there is a story on how Debussy came to arranging these piano pieces for orchestra. Erik Satie and Claude Debussy became friends after Satie moved to Montmartre in 1887. By 1897, with Satie’s popularity and finances dwindling, Debussy decided to take advantage of his own growing popularity to draw public attention to his friend’s pieces by orchestrating the 1st and 3rd Gymnopédies.

Les Animaux Modèles is a ballet inspired by Fables, a series of French classic tales collected by Jean de La Fontaine. In one of the movements of the orchestral suite, “L’homme entre deux âges et ses deux maîtresses”, the orchestra depicts the tale of a man with two mistresses, one elder and one younger. In order to seem closer in age to the younger, she plucks out all the gray hairs on the man’s head. Having the same idea, the elder mistress does the same to the man’s dark hairs. Eventually, between the two, the whole ordeal leaves the man bald.

On a more adventurous note, Stravinsky’s The Firebird Suite is a five movement suite that tells the tale of the valiant Prince Ivan and his mission to defeat the evil immortal, Kaschei. With the help of the Firebird – whom he rescued along the way – he battles his way past Kaschei’s illusions to his foe and to save his people.

The best story is saved for last, as Prokofiev’s Peter and the Wolf is the symphonic fairy tale about a boy discovering a world of forest creatures, adored by adults and children alike. Narrated by Santa Ono, the orchestra breathes life into the animal characters with each instrument. The bird is played by the flute (Emily Richardson), while the oboe represents the duck (Andrew Montgomery). The cat is played by the clarinet (Jonathan Lopez) while the big, bad wolf is represented by three French Horns (Ivy Chao, Kristin Ranshaw, and Hans Benoit). For the humans, the hunters are represented by woodwinds, trumpets and percussion, while the bassoon (Katie Scheerer) plays Peter’s grandfather. Our protagonist of the story, Peter – led by concertmaster Matthew Yep – is played by the strings section. While pieces of the story are told by a narrator, it is the music and the orchestra who tells the bulk of Peter’s tale, proving that music is a universal language.

Join the UBC Symphony Orchestra and Maestro Jonathan Girard at the Chan Centre on December 2nd, 2017 at 8pm for a concert that will warm the heart, and comfort the soul.

About the author: Hannah Wong is a student of the Arts & Entertainment Management Diploma program at Capilano University. Having already received her undergraduate degree at UBC in music, she is currently back on campus as a Marketing & Communications Intern at the UBC School of Music and the Chan Centre for the Performing Arts.