Q & A with Owen Underhill

Vancouver’s Turning Point Ensemble is an award-winning large chamber ensemble known for outstanding musicianship and innovation. In this Q&A, the Chan Centre catches up with Artistic Director and conductor Owen Underhill to talk about what it’s been like to get the ensemble back together onstage for the first time in a year, and the exciting and innovative music that is a part of the upcoming TPE Interactive digital performance filmed at the Chan Centre and premiering Friday June 11. 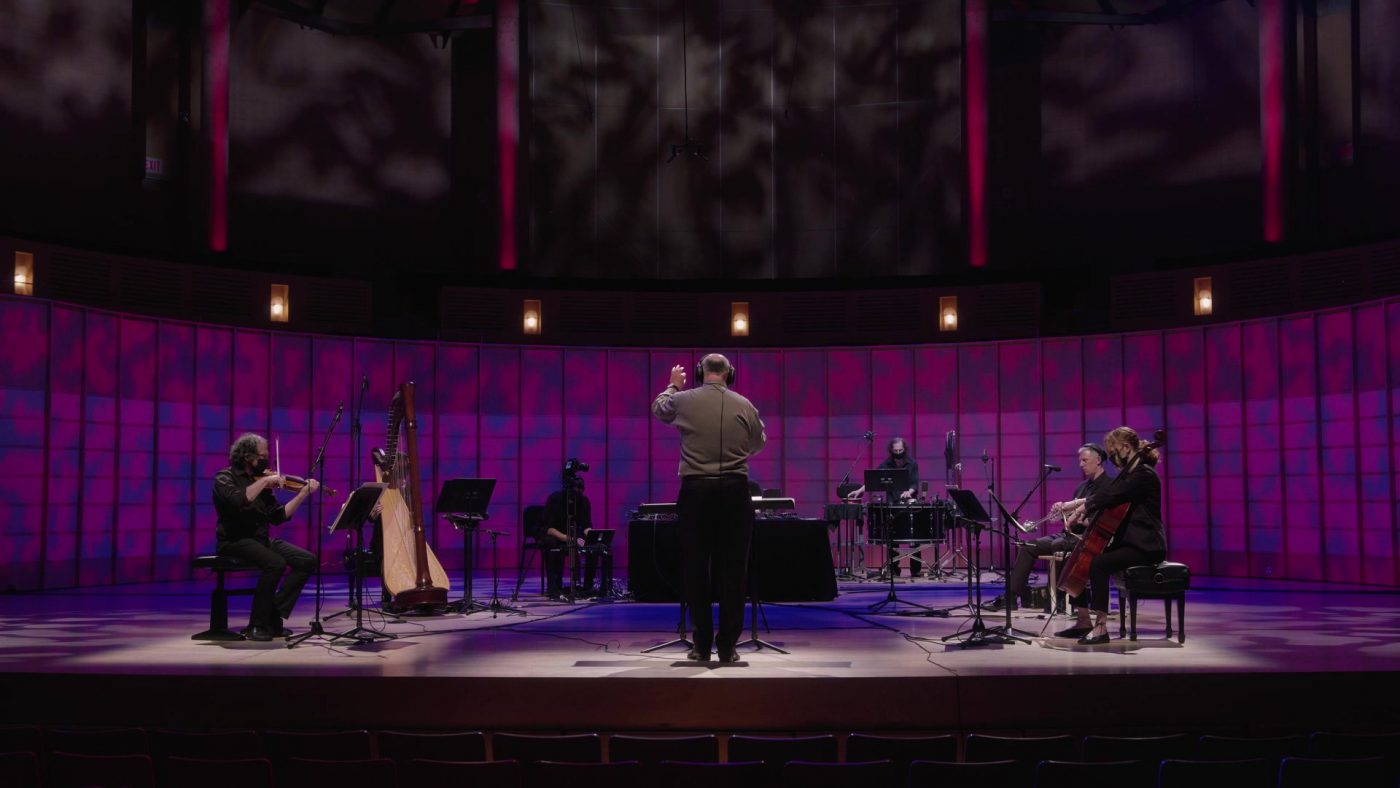 Chan Centre: Hi Owen!  After a year of no live concerts and video projects with solo ensemble members, what was it like to get the larger group of Turning Point Ensemble musicians back together on one stage for this recording?

Owen Underhill: It was a relief to get the whole ensemble together again and make music together. Even though we have been pursuing quite interesting solo film projects, that does not take the place of the chamber music collaboration that is at the heart of Turning Point Ensemble. It had actually been over a year of not playing together as an ensemble so we all appreciated the opportunity to sink our teeth into a large-scale project. Of course, it was necessary to follow all of the safety protocols including social distancing on stage, and wearing of masks for all except wind players. It is was a treat therefore to have the opportunity to space out in the Chan Shun Concert Hall, and have all the outstanding technical support there to realize such a complex project.

CC: The program features works by two very cutting-edge composers David Eagle and Mauricio Pauly. As the artistic director as well as conductor, what was it that drew you to the works of these composers?

OU: The program was designed to demonstrate innovative approaches of mixing electronic and computer processing with a large ensemble. This is still something that is not often tried due to the difficulty of capturing the sound of many instruments in an interactive and hybrid setup. Both David Eagle and Mauricio Pauly are among the few in this part of the world that are attempting this kind of work. David is from Calgary and is now living in Victoria. We had enjoyed performing his Two Forms of Intuition before, and were in discussions about recording some of his works for an audio CD he will be releasing. Mauricio, originally from Costa Rica, and now in Vancouver since 2017, takes a different approach of integration where the players are often more directly involved in the processing and manipulation of their own sound. I felt the two approaches would be a nice mix in our TPE Interactive presentation.

CC: Both of the works from David Eagle, Two Forms of Intuition (2011) and Unremembered Tongues/ʌnɹɪmembəɹd tʌŋz (2013), have interactive computer elements to them. Can you describe how these elements fit in and what audiences can look forward to with these works?

OU: David Eagle in his two works performs a rather magical performance role. From the centre of the hall, he controls through hand and arm movements (you will see this in the recording) various processing effects which result in the instrumental sounds being spatialized and moved in an effectively three dimensional space. In addition to the spatialization, there are many other effects that David is controlling including looping and modulation. Thanks to the excellent work of the audio engineer James Perrella, you can capture this quite well in the recording. Headphones are recommended. The Unremembered Tongues/ʌnɹɪmembəɹd tʌŋz piece adds another whole dimension through the inclusion of languages in danger of extinction. As sung, whispered and vocalized by the outstanding soprano Robyn Driedger Klassen, and then further magnified and transformed by the composer, the sonic power and character of these languages and the tragic potential loss of cultural experience is palpable.

"The program was designed to demonstrate innovative approaches of mixing electronic and computer processing with a large ensemble... David Eagle and Mauricio Pauly are among the few in this part of the world that are attempting this kind of work." 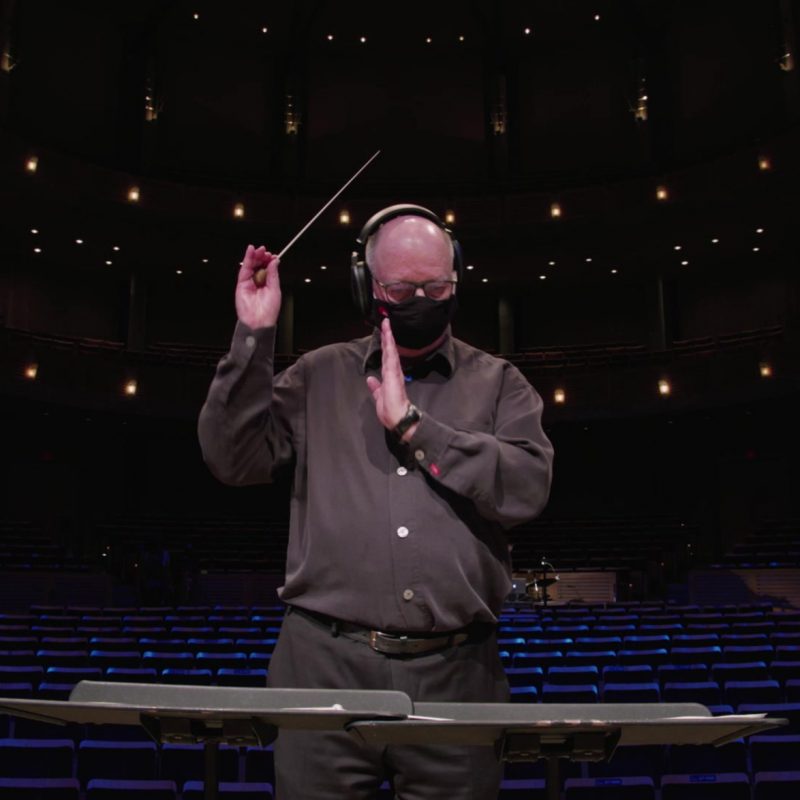 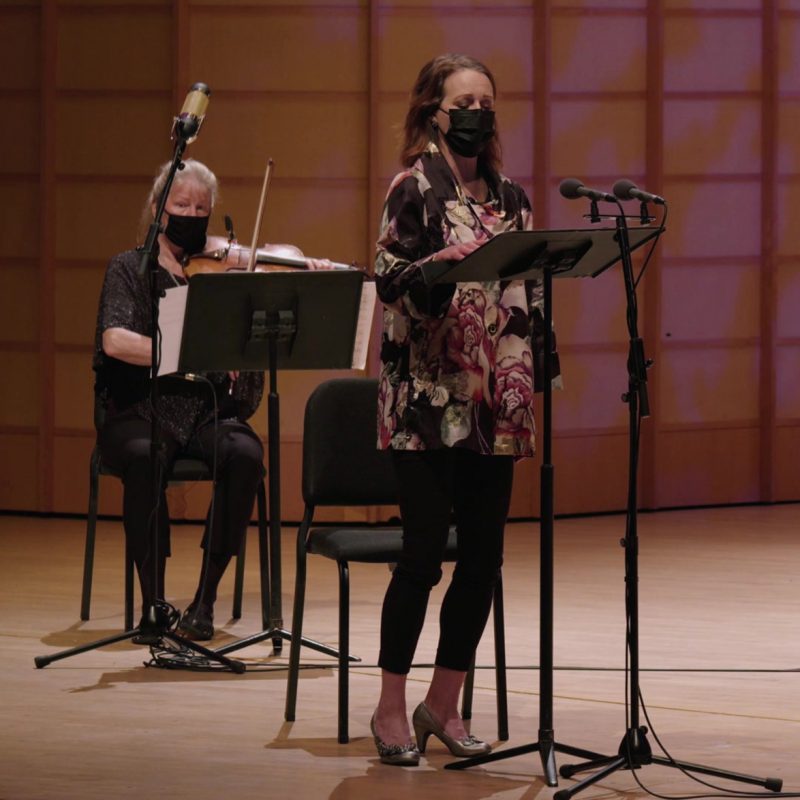 CC: Mauricio Pauly’s new work We en flor de chiflón is a brand new commission written for the Turning Point Ensemble. What was the process of working with him on this new work, and how does this complement the other work of his on the program, Clinamen clinamen clinamen?

OU: Mauricio was very interested in working and collaborating directly with each performer. That collaboration went beyond the extended performance techniques into the world of electronic manipulation. For example, our harpist Janelle Nadeau is extending her tones through an extra pedal (like an electric guitarist) that she controls, and our trumpeter Marcus Goddard is operating his own interface and midi controller. Mauricio also worked extensively with our percussionist Jonathan Bernard who, as audience members will see, is busy spinning crotales (high disc-shaped bells) and other objects on his bass drum. Finally, it should be mentioned that Mauricio performs a wizard-like role in his own piece, generating various electronic tracks (including a male orator which has a large role in the piece), and manipulating live the sound of the players which keeps reappearing in new contexts. The final ‘surprise’ in our working together with Mauricio is that he continued to build his work in post-production adding many other layers particularly in the end section of the piece.

As for Clinamen, clinamen, clinamen – this was an entirely acoustic performance for clarinet and string quartet of an earlier work. What was the most interesting for me is that this piece, without any additional electronics or effects, had a kind of hybrid and transcendent character that seemed very much in keeping with the new commission.

CC: What has it been like for the ensemble, performing without live audiences?

OU: Yes, this has been very different. In live performance, these pieces would have involved octophonic surround-sound speakers as well as the kind of in-person interaction we cherish with our audience. It is, as in a recording session, somewhat anticlimactic to pack everything up and go home after take 27, but we and the audio/video crew have worked hard to allow the viewer to get right inside these works and close up to the performers. Please also do listen to the interviews with the composers that can be viewed at the end of the four works.

One final point: You will have access to TPE Interactive for a full year, so that will allow you to listen again and get to know the music more intimately than one can on a single hearing. Thanks for participating, and please feel to write us at info@turningpointensemble.ca with your impressions!