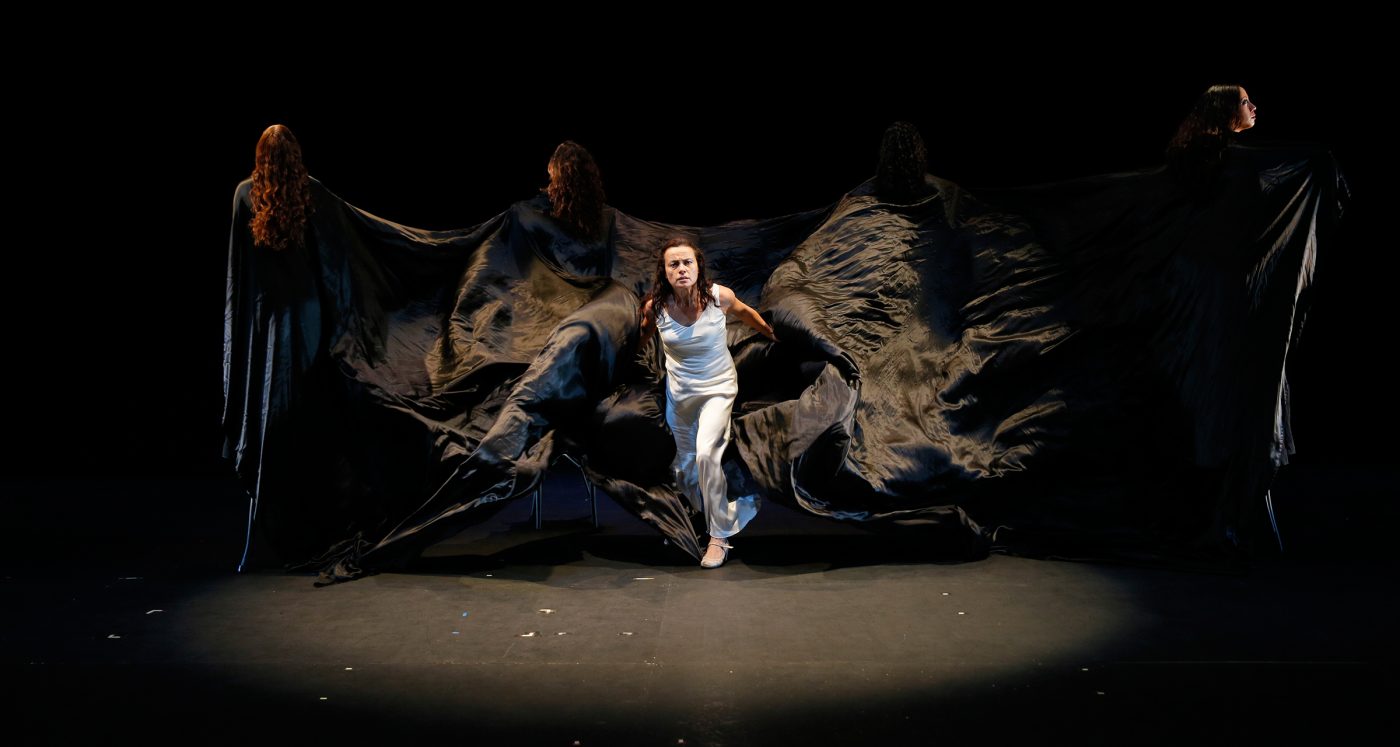 On Sunday March 12 at 7pm, the Chan Centre presents Noche Flamenca’s Antigona. See below for a synopsis of the play and scenes (spoiler alert: this isn’t one of those plays with a happy ending)

by Ruby Blondell, Professor of Classics (Adjunct in Gender, Women and Sexuality Studies) University of Washington

Antigone, a tragedy by the Greek playwright Sophocles, was first produced around 442 BCE in Athens, at a dramatic festival in honor of the god Dionysus. It is based on myths about the children of Oedipus, the legendary king of Thebes. After Oedipus’ death, his son Polyneices waged war on their native city in an attempt to gain power, but was killed in battle by his brother Eteocles, who was defending the city (along with his own claim to the throne). Eteocles died simultaneously, at his brother’s hand. As a result, their uncle Creon became king.

When Sophocles’ drama opens, Creon has forbidden anyone to bury the corpse of the traitor Polyneices under penalty of death. Against the advice of Ismene, her more conventional sister, Oedipus’ daughter Antigone defies this decree and buries their brother in secret. She shows no interest in the affairs of state; she is driven rather by family loyalty (which demands the burial of dead kin) and a powerful sense of religious obligation (an unburied corpse is offensive to the gods). After Creon’s guards uncover the corpse, Antigone buries it again, but this time she is caught. When Creon confronts her, she tells him defiantly that she was obeying the “unwritten laws” of the gods, which have far more weight with her than mortal laws like his. Outraged at being defied by a woman, her uncle orders her buried alive in a rocky cave. Creon’s son Haemon, who is betrothed to Antigone, makes an eloquent appeal for her life, but the king remains intransigent. After she is led away, lamenting her fate, the blind prophet Tiresias threatens Creon with terrifying prophecies of divine disapproval, and he finally changes his mind. But it is too late. A messenger arrives to inform us that Creon buried Polyneices himself and then hurried to Antigone’s tomb, only to find that she has hanged herself with a piece of her clothing; the first to find her body was Haemon, who angrily threatened his father but then killed himself instead, embracing Antigone’s corpse. When his mother, Creon’s wife, hears the news about her son, she likewise kills herself. Creon ends the play a crushed and remorseful man.

Sophocles’ famous drama has given rise to many hundreds of productions, adaptations, and reinventions, in all kinds of artistic media. It has also served as a vehicle for explorations in ethical, legal, political, psychoanalytic and feminist theory. Antigone has been a focus, too, for questions about the gendering of heroism–questions that have changed shape along with shifting cultural mores. In Victorian times, for example, Antigone could be perceived as the incarnation of dutiful Christian womanhood, but more recently her resistance to masculine authority has made her a feminist icon. Though her character as portrayed by Sophocles is fundamentally apolitical, her defiance of the king’s authority has also made her a poster-child for civil disobedience and free speech, her death consecrated her as a martyr to state oppression. She has stood for political resistance in wildly divergent cultural conditions, from Nazi-occupied Europe to South Africa under apartheid, from the European student uprisings of May 1968 to the Irish “troubles.” 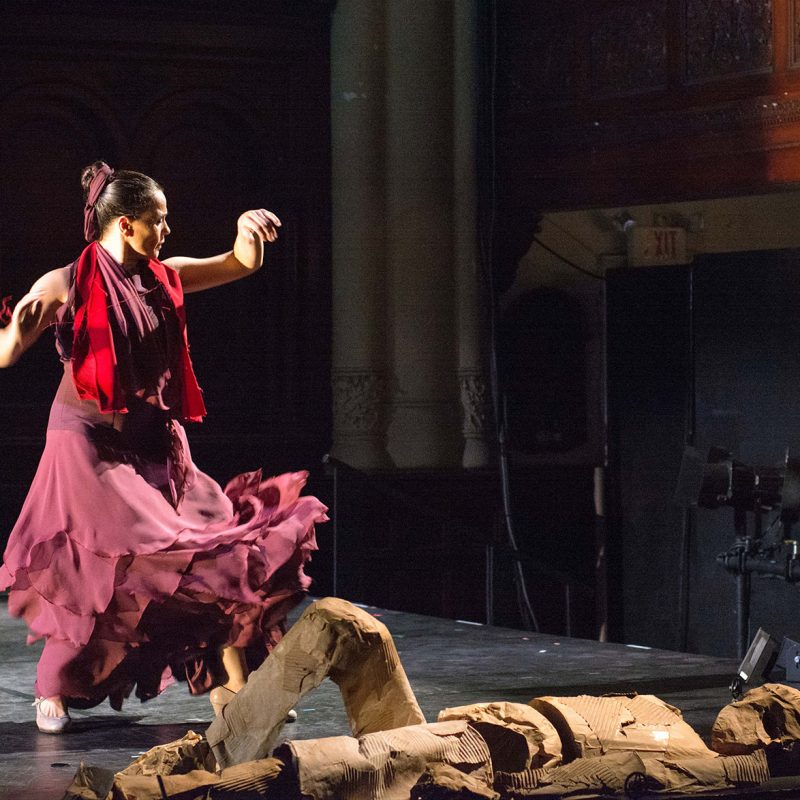 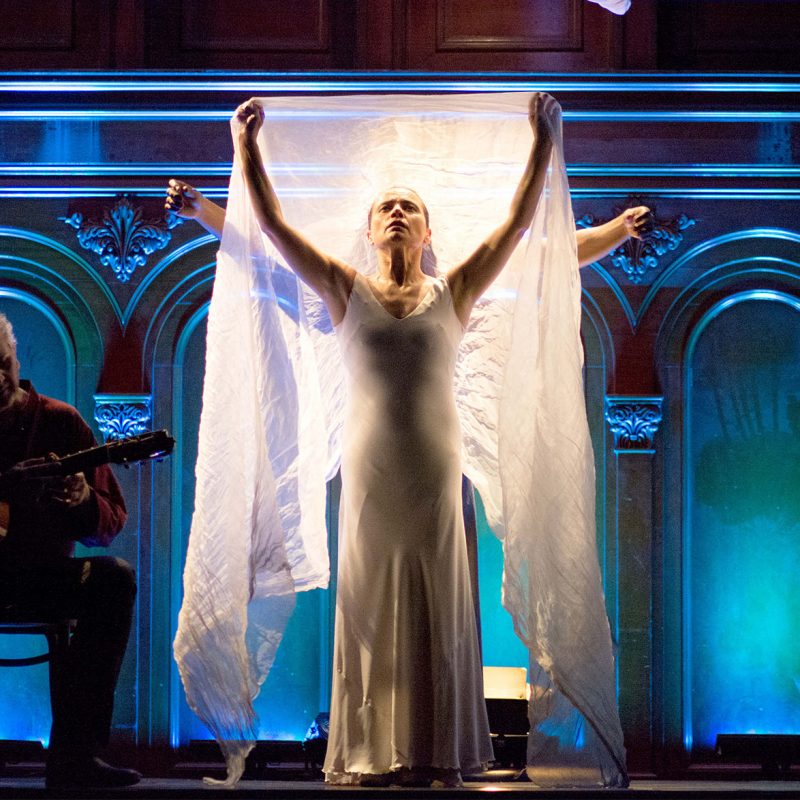 1) Prayer to Zeus (Rezo al Zeus) A prayer to the gods to break the curse of the Labdacus family.

3) The Family (La Familia) An introduction to the Labdacus family.

4) Brothers’ War (Guerra Entre Hermanos) Eteocles and Polyneices, sons of Oedipus, war against one another at the gates of Thebes.

9) Journey on the River of Acheron (Viaje al Rio Acheron) Antigone’s passage to the underworld.

10) Tiresias Confronts Creon (Confrontación de Creonte y Tiresias) Tiresias foresees Creon’s fate and confronts him. He has betrayed the gods, the dead and the living.

11) Creon’s Nightmare (La Pesadilla de Creonte) The consequences of his actions begin to dawn on Creon.

12) Exile to the Cave (Exiliada a la Cueva) Creon exiles Antigone to the cave.

15) Epilogue (Epílogo) There is no happiness where there is no wisdom. No wisdom, but in submission to the gods. Big words are always punished. Proud men learn to be wise in old age. 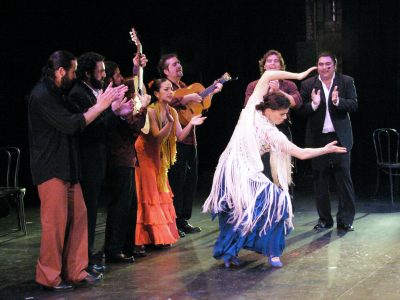 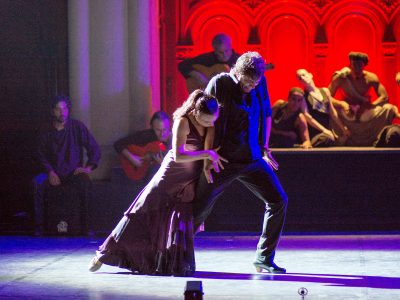